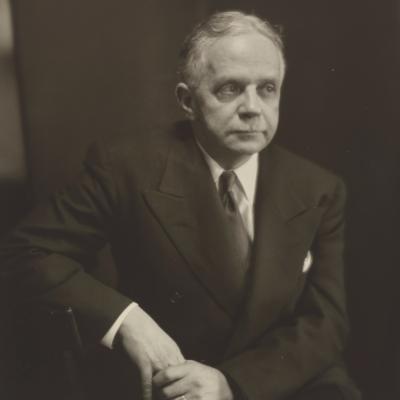 As Executive Secretary of the NAACP from 1929-1955, the civil rights activist Walter White (1893-1955) was in the forefront of all issues of black identity, from segregation and voter suppression, to legislation assuring fair employment practices in government and industry.  The NAACP Legal Defense and Educational Fund was established during his tenure.  His journalistic investigation Rope and Faggot: A Biography of Judge Lynch (1929), and novel The Fire in the Flint (1924) exposed the brutality of lynching.  These and other works such as Flight (1926) portrayed a broad sense of black cultural life, and his connections to publishers and support of other writers established him as a key figure in the Harlem Renaissance.  With NAACP Special Counsel Thurgood Marshall, he explored the 1934 Detroit race riot.  As a reporter and columnist, he recounted the experiences of black men serving in the military, spurring Harry Truman's executive order banning segregation in the armed forces.  In 1948, he released his autobiography, A Man Called White.  Also that year, he delivered the annual Lincoln Lecture in the Great Hall on the topic of "Mr. Lincoln's Unfinished Business."