Voices from the Great Hall

For over 160 years, Cooper Union’s Great Hall has been a bastion of free speech, social activism, education, culture, and electoral politics. The Voices from the Great Hall digital platform encompasses all known sound and video recordings made in the Hall and held by The Cooper Union dating back to John Dewey’s 1941 address "In Philosophy." This historical collection, which documents over 3,000 Great Hall programs, also includes photographs, fliers, press releases, and other ephemera dating back to 1859.

Milton Glaser in the Great Hall

In conjunction with a winter 2020-21 exhibition and a panel this spring at The Cooper Union, we celebrate the work of one of the most influential graphic designers of the 20th century—Milton Glaser—who died in 2020. In this video, he speaks about his career in The Cooper Union’s Great Hall in 2017.

A Cooper Union alumnus who co-founded the revolutionary Push Pin Studios in 1954 and New York magazine in 1968, Glaser is known for his renowned I ♥ NY logo. He also created iconic graphic identities for DC Comics and Brooklyn Brewery, as well as unforgettable posters and album covers for Bob Dylan, John Cage, and more. His work for non-profit clients included campaigns for the World Health Organization’s Special Programme on AIDS and the United Nations, among others. Glaser was honored with the Lifetime Achievement National Design Award from the Cooper-Hewitt Museum and the National Medal of Arts in 2009.

From its opening, the Great Hall has provided a platform for promoting racial justice, hosting lectures by abolitionist Frederick Douglass (eight speeches from 1863 to 1880), an address by Chief Red Cloud on the rights of indigenous peoples (1870), and numerous talks by 19th century reformers. In 1909, W.E.B. DuBois spoke in the Great Hall during the NAACP’s founding conference. Both the NAACP and CORE (Congress of Racial Equality) became a regular presence in the Great Hall into the 1960s, with the Cooper Union Forum organizing speeches by Walter White, Roy Wilkins, James Farmer, and Floyd McKissick. In recent decades, leading professionals, intellectuals, political figures, and artists of color have continued sharing their ideas and work in the Hall. From programs featuring Thurgood Marshall (1954 and 1956) and Cornel West (1993, 2004, 2009, and 2012) to John Lewis (2017) and Women of Color on Broadway (2020), the Great Hall continues to support and celebrate the ideals of justice and empowerment. 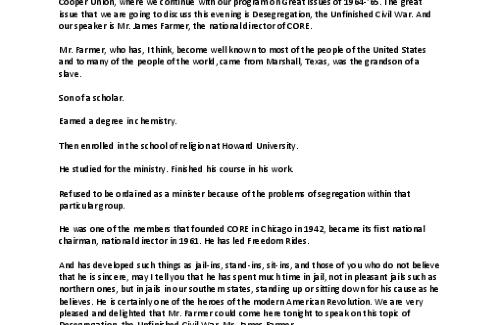 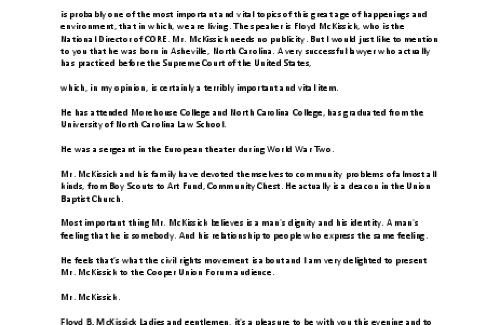 The Architecture of the Great Hall

Frederick Petersen, the Foundation Building’s original architect, and Peter Cooper, an avid inventor, created a building with unique elements—advanced for their time—including the Great Hall, a large open space designed for public gatherings and civic functions. When the building was completed in 1859, the Great Hall’s main entrance was on 8th Street, and its floor was flat and sunk below the building’s basement level. Petersen designed shallow, multidirectional arches supported by a grid of 19 slender columns affording adequate sightlines to the stage, then facing south. This vast space was supported by a field of small structural piers along the west side of the room.

In 1884 architect Leopold Eidlitz was commissioned to address faults in the building’s foundation and to restructure the piers supporting its first and second floor windows. Eidlitz replaced the original field of columns in the Great Hall with a grid of 18 fortified columns that supported new arches spanning from east to west across the space. He moved the stage to the west side of the Hall and raked the floor to provide elevated seating. Eidlitz also added a retaining wall to support ventilation under the seats via a large fan installed on the southwest side of the room.

In his 1974 interior renovation of the Foundation Building, John Hejduk minimally reconfigured the Great Hall, adding half walls to separate seating from the entry doors along east side of the room. Hejduk replaced the Hall’s wood floor with poured concrete, updated its ventilation and electrical systems, and added a hand-troweled plaster finish to match the rest of the building’s interior, which he dramatically transformed into a work of modern architecture within a 19th-century façade. 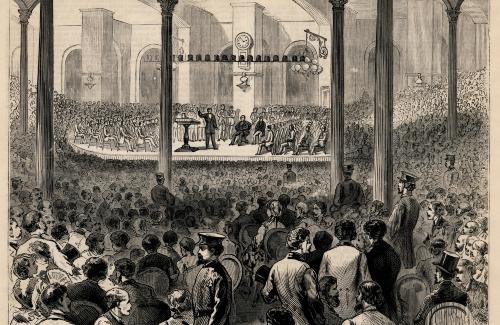 Mass Meeting at Cooper Union, September 4th, to Consider the Administration of the…September 23 1871 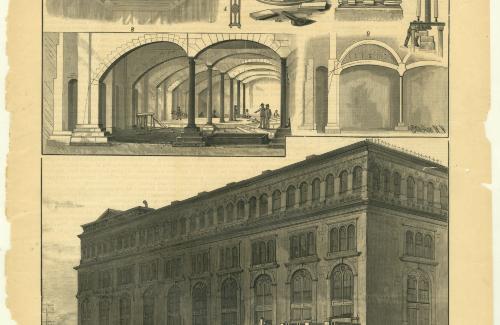 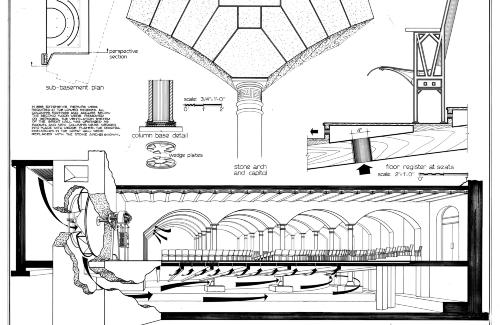 The Great Hall and Its Ventilation System1971 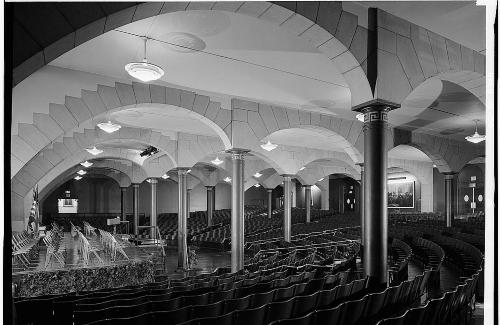 Great Hall Interior from the South1960s 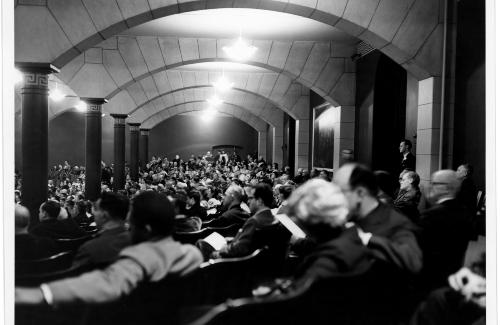 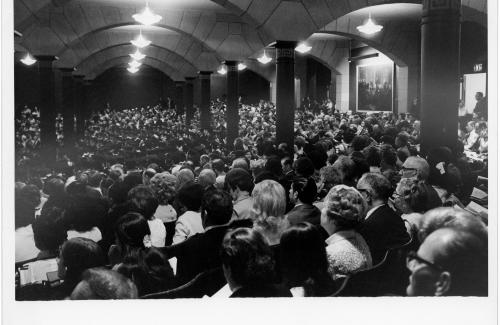 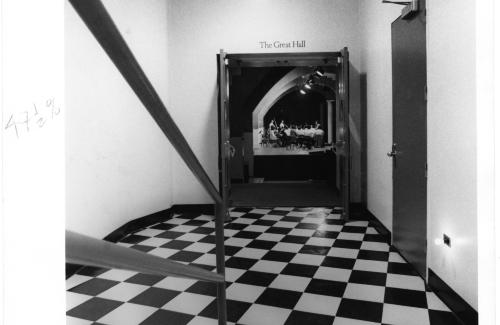 View into Great Hall from Stairwell1980s 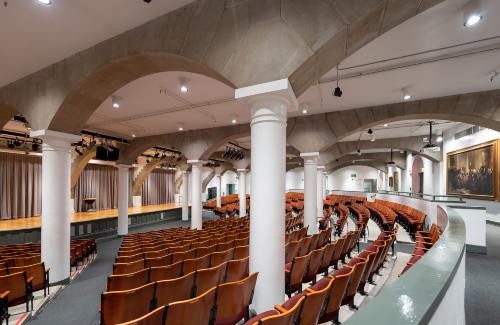 View of Great Hall from StageAugust 2020